THE GENESIS OF JAPANESE TEA

In the late 14th, early 15th Century, Zen monk Ekkei Shūkaku [越渓秀格], at the time the 5thsuccessor in line of Eigenji temple [永源寺] in Shiga prefecture, discovered that the water and soil in the surrounding mountains of this convent was highly suited for the production of tea. Consequentially, he commissioned the villagers of these towns to take to the cultivation of tea bushes and give precedence to producing the tea that later became known as one of Japan’s most favored brands, the tea from Mandokoro [政所茶]. One verse in the song sung during harvesting season illustrates how highly this tea had become esteemed. It first calls out Japan’s major tea producing area, singing “Uji is Japan’s tea-manufacturing district” [宇治は茶所], then the verse continues “Tea comes from Mandokoro” [茶は政所]. This verse clearly portrays that both regions were just as important places in Japan’s tea culture.

Mandokoro is a small neighborhood in Higashiōmi city [東近江市], situated on the western flank of the Suzuka mountain chain [鈴鹿山脈], which runs through Mié along the borders of Gifu and Shiga prefectures. Eigenji temple is located at the foot of the mountains, whereas the tea gardens are situated higher up at approximately 300 to 400 m above sea level. The bushes rely upon water from the Echi river [愛知川], which leads into Eigenji dam first, and then makes its way to the Yodo river in Osaka.

A farm positioned at this height is bound to experience strong cold winters. And it is said that the gardens in Mandokoro have to cope with thick packs of snow during the coldest seasons, which piles up on top of the tea-bushes putting tremendous pressure on their branches. Nevertheless, these bushes have learned to cope with cold and snow over the years, and have become particularly adapted to this specific environment. The oldest tree remaining in these precincts was planted over 300 years ago. At the time, tea-bushes were multiplied solely by taking seeds from a bush, and sowing them wherever it was desired to begin a new garden.

This practice has become less common since the introduction of selective breeding [品種改良(] and the adaptation of cultivars [品種] for the ease of cultivation and harvesting. Recently, planting cuttings from one particular cultivar in order to maintain the genetic construction of that plant is the more common practice. This practice allows for rows of bushes that develop leaves at the same speed, in the same size, and with the same flavor, allowing for easy manipulation by machines. And a steady and predictable outcome as a finished product. With seeds however, this cannot be achieved. Because, re-planting a garden only from the seeds of even a single cultivar will result in a series of bushes with slightly different characteristics, reverting the species back to its original state as a diverse and adaptable plant.

On the contrary, since reproduction from seeds is the most natural method, it doesn’t surprise that the plants grown this way become more robust and versatile in regard to its environment. In Mandokoro, only native cultivars are in use and this has always been the case, most of which are at least over 60 years old. There are several reasons for this, but the most accurate explanation is that other cultivar species cannot survive the cold winters of this region. The native bushes from Mandokoro grow low to the ground and have extremely flexible branches. When snow piles up on top of them, their flexibility allows the plant to give way to the weight without fainting underneath such pressure. Other cultivars would in this case be prone to snap.

Another reason given is that, in contrast to contemporary practices, gardens are usually not re-planted. When a bush fails to produce the desired amount of leaf due to its age or state of maturation, its branches are cut at the base to allow for young, fresh branches to sprout from the base. This approach allows the plant to stay rooted in its natural environment, while on top prongs may multiply at a height that is accessible to human hands. Observing this practice omits the necessity to plant new trees, but requires patience while anticipating the re-growth of those bushes.

Although the methods that are respected in Mandokoro are distinctly traditional, more contemporary minded farmers may refer to these ways as non-productive and limiting. Nevertheless, what Mandokoro informs us of is that what we perceive as traditional today is not what has been contemporary in the past. When we envision a traditional Japanese tea garden, we are bound to recount the beauty and extensiveness of those gulfing lanes of trees on the mountain flanks around Uji, or on the plains of Shizuoka, but it was only after the mechanization of tea production that tea bushes have become lined up in rows. Prior to this, each bush was a single entity in a patchwork of round dots when seen from afar. And this is how the farms are still laid-out in Mandokoro today.

Because of this random, natural arrangement of the farm, the tea cannot be harvested by machine and thus has to be picked by hand. The way this is conducted is again illustrative of the tradition and special character of the tea produced in this region. The more orthodox practice is to pluck only the top two to three leaves using the soft part of the thumb and forefinger to grip, bend and snap the soft twig. For Mandokoro tea, the whole hand is wrapped around the twig at the height of the fifth or sixth leaf counted from the bud, and in an upward motion, the leaves and bud, with inclusion of a part of the twig, are ripped off.

Since Mandokoro is located high up in the mountains, winters tend to get cold and temperature differences between day and night are large. This creates an ultimate environment for tea bushes to grow, and renders an unmatched sweetness in the flavor of this tea. During the coldest seasons, the plant generates natural sugars in the roots in order to survive. These sugars enter the veins of the bush in early spring, eventually making their way through into the leaf imbuing them with a highly delicious cloying aroma. Moreover, no chemicals are used for the cultivation of these bushes, and also no unnatural fertilizers have been employed. What has been bestowed onto the roots is limited to pampas grass, fallen leaves, and in some cases the remnants of Cole seed for the production of Canola oil.

All the above-mentioned elements imbue the tea from Mandokoro with a very exclusive character. It is a tea that is produced, closely observing traditional procedures, and applying only natural cultivation methods without giving way to contemporary policies as mass-consumption and over-production. The native bushes are ingrained with the fragrance of the soil and nurtured with the water of Echi River, which springs in the mountains where this small cultivation area is situated. Mandokoro tea allows its drinker an insight in the true tradition of Japanese tea manufacturing and provides us with a fully unique experience to enjoy the genuine taste of this area in specific; one that may not be obtained elsewhere. 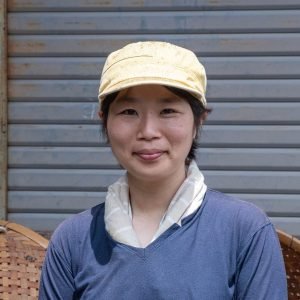 In order to preserve the ages old tea farming traditions in the Mandokoro region, where the population is aging and less people are able to continue tea manufacturing, Ren has resolved to take the preservation of this culture in her own hands.