The overwhelming majority of tea practitioners in contemporary Japan are women, but there has been little discussion on their historical role in tea culture (chanoyu). In Cultivating Femininity, Rebecca Corbett writes women back into this history and shows how tea practice for women was understood, articulated, and promoted in the Edo (1603–1868) and Meiji (1868–1912) periods. Viewing chanoyu from the lens of feminist and gender theory, she sheds new light on tea’s undeniable influence on the formation of modern understandings of femininity in Japan.

Corbett overturns the iemoto tea school’s carefully constructed orthodox narrative by employing underused primary sources and closely examining existing tea histories. She incorporates Pierre Bourdieu’s theories of social and cultural capital and Norbert Elias’s “civilizing process” to explore the economic and social incentives for women taking part in chanoyu. Although the iemoto system sought to increase its control over every aspect of tea, including book production, eighteenth- and nineteenth-century popular texts aimed specifically at women evidence the spread of tea culture beyond parameters set by the schools. The expansion of chanoyu to new social groups cascaded from commoner men to elite then commoner women. Shifting the focus away from male tea masters complicates the history of tea in Japan and shows how women of different social backgrounds worked within and without traditionally accepted paradigms of tea practice. The direct socioeconomic impact of the spread of tea is ultimately revealed in subsequent advances in women’s labor opportunities and an increase in female social mobility. Through their participation in chanoyu, commoner women were able to blur and lessen the status gap between themselves and women of aristocratic and samurai status.

Cultivating Femininity offers a new perspective on the prevalence of tea practice among women in modern Japan. It presents a fresh, much-needed approach, one that will be appreciated by students and scholars of Japanese history, gender, and culture, as well as by tea practitioners.

Be the first to review “Cultivating Femininity: Women and Tea Culture in Edo and Meiji Japan” Cancel reply 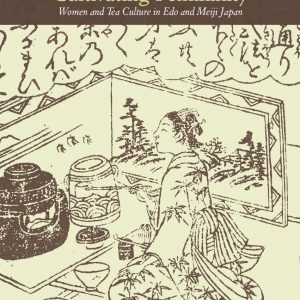