This book examines the complex relationship between class and gender dynamics among tea ceremony (chadō) practitioners in Japan. Focusing on practitioners in a provincial city, Akita, the book surveys the rigid, hierarchical chadō system at grass roots level. Making critical use of Bourdieu’s idea of cultural capital, it explores the various meanings of chadō for Akita women and argues that chadō has a cultural, economic, social and symbolic value and is used as a tool to improve gender and class equality. Chadō practitioners focus on tea procedure and related aspects of chadō such as architecture, flower arranging, gardening and pottery. Initially, only men were admitted to chadō; women were admitted in the Meiji period (1868-1912) and now represent the majority of practitioners. The author – a chadō practitioner and descendant of chadō teachers – provides a thorough, honest account of Akita women based on extensive participant observation and interviews. Where most literature on Japan focuses on metropolitan centres such as Kitakyushu and Tokyo, this book is original in both its subject and scope. Also, as economic differences between metropolitan and non-metropolitan areas have become more pronounced, it is timely to explore the specific class and gender issues affecting non-metropolitan women. This book contributes not only to the ethnographic literature on chadō and non-metropolitan women in Japan, but also to the debates on research methodology and the theoretical discussion of class. 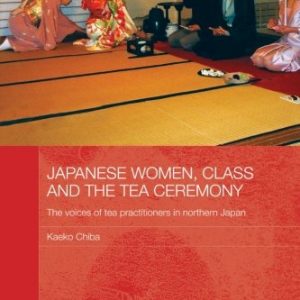