In Japan it is tradition to start the New Year with a cup of Ōbukucha, a tea consumed with the wish for a prosperous and healthy New Year.

The tradition of Ōbukucha originated in the 10th century during the reign of emperor Murakami (村上天皇). When the country was overtaken by a plague of sickness, the emperor ordered Kūya Shōnin (空也上人), founder of the Rokuharamitsuji-temple (六波羅蜜寺) in Kyoto, to make an offering in prayer for the quick disappearance of the disease. Kūya Shōnin brought a cart with dried plums and kelp and offered tea to the suffering. Thanks to this act, the plague gradually faded away. Impressed by this act, the emperor decided to drink this tea every year at the beginning of the new year and from this time on, the naming Ōbukucha (王服茶・皇服茶) – or “tea consumed by the emperor” – became common use.

Afterwards, this tradition of having a cup of tea with a dried plum and a knot of kelp at the beginning of the new year also spread throughout the common people. The pronunciation of the naming of the yearly event, Ōbukucha, remained the same, but to bring the meaning of the word closer to the common people, the writing changed to (大福茶) or “tea of great happiness“, making a direct reference to the belief and the prayer for a healthy and maliciousness-less year.

Contemporarily, the tradition of Ōbukucha still remains and is most commonly observed at house-holds in the Kansai area of Japan. Each year on new year’s day, before having the traditional cup of spiced sake, the families pray for a prosperous year, free of maliciousness by exchanging a cup of Ōbukucha. However, the way the rite is conducted and even the tea consumed nowadays greatly differs from household to household, varying from Sencha or Bancha to Genmaicha or Hojicha.

At The Tea Crane, we have chosen to create an Ōbukucha together with our tea farmer in Nara, that is in line with our values and stance towards health and tea. The base for the tea is a sencha blend from various cultivars and native species, from multiple organically cultivated tea gardens. Using a blend is beneficial in combining the traits from multiple tea garden locations, and thus providing more beneficial nutrients and healthy minerals in the tea. We’ve sprinkled the tea with a delicious sencha powder; a powder made from sencha leaves that resembles matcha, but with all the nutritional benefits of sencha.

Green tea also contains Vitamin C and many minerals such as chromium, manganese, selenium and zinc. These substances are related to boosting the immune system and promoting overall health.

Through sprinkling the sencha with ground sencha leaf powder, you don’t only get the benefits of what you get out of the leaf as an infusion, but you also intake some of the nutritious components in tea that are not released in water and are retained in the tea leaf itself.

With this Organic Ōbukucha I sincerely wish everyone a splendid, healthy, and energized 2023. Drink this tea in celebration of the New Year on January 1st, and during the first weeks of the New Year to boost your natural immunity and overall health. 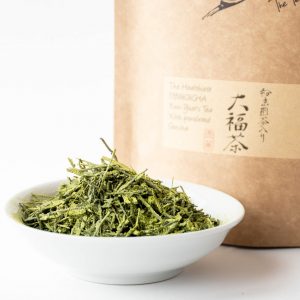