Traditional matcha tea bowl for use in the tea ceremony. Tea bowls used for tea ceremony practice are preferred to have traditional shapes and motifs. They often are imitations of famous tea bowls that were selected as preferred and valued vessels by the tea masters of old. The description of such bowls is often divided into shape, and  style or motif. Shapes often resemble ‘everyday’ objects that have a significance in Japanese culture. Motifs are commonly preferred applications and styles of craftsmanship.

Cultural significance of the bowl in question:

Shape: calligraphy brush wash basin (fude-arai; 筆洗). The shape of this bowl is created in resemblance of a wash basin used to clean calligraphy brushes after use. The arts such as poetry, calligraphy and incense had a prominent place among the cultured tea practitioners of old and thus related motifs found their way into the tea chamber as well.

Motif: irabo (irabo; 伊羅保). The irabo style is a common korai (korean-ware) application. These tea bowls are have a rougher surface and appearance and are often well suited for the preparation of a bowl of koicha – thick tea.

About the artist: Yohei Nakamura 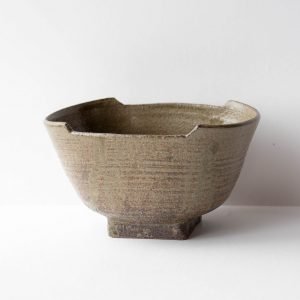