Traditional matcha tea bowl for use in the tea ceremony. Tea bowls used for tea ceremony practice are preferred to have traditional shapes and motifs. They often are imitations of famous tea bowls that were selected as preferred and valued vessels by the tea masters of old. The description of such bowls is often divided into shape, and  style or motif. Shapes often resemble ‘everyday’ objects that have a significance in Japanese culture. Motifs are commonly preferred applications and styles of craftsmanship.

Cultural significance of the bowl in question:

Motif: soaked in glaze (kohiki; 粉引). The kohiki approach is simple in design. Yet it is often deeply appreciated for the natural white shades that appear on the surface, and its soft, warming feeling when taken into the hands. The vessel is either soaked or drained in good amount of white masking glaze, leaving a thick layer of creamy white matter on the surface. Sometimes the vessel is wholly drenched, or at other occasion one area may be kept clear, while the remainder is fully soaked in white glaze. The natural way in which the glaze settles on the surface of such a vessel is for many admirers of earthenware a feature of appreciation. And this kind of natural simplicity is for many a valued feature that expresses the sentiment of the wabi aesthetic.

About the artist: Yohei Nakamura 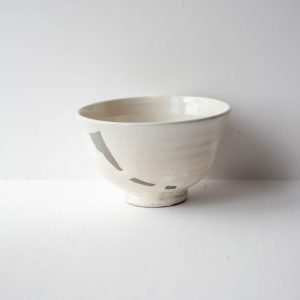